Well, the more berries the birds consume, the drunker they get and they fly into buildings and can kill themselves from a concussion. See the yellow tips of his tail feathers…this may be where they got the name. Not all birds who crash into fences and windows die, if you leave them for the day to “sleep it off”, they will be gone and off scavenging with their friends the next time you check.

Besides walking over stoned sparrows, Mr. Mole has planted some winter veggies…lettuce and Swiss Chard and beets and things. The cage he made keeps the hungry birds away.

But back in the sewing room…

Lots of folks find me on Yelp and Google and while I limit my business to wedding gowns and refer everything else to other seamstresses I know, sometimes you just have to get stuck in and do something unexpected.

Here in the Pacific Northwest we have huge forests and huge summer forest fires that require many firefighters on the ground and those in the air to drop water and survey the spread and damage. This client needed some extra room in his flight suit while carrying out his helicopter duties in the field.

He bought extra fabric at our JoAnn’s and tried on his 2 sets of clothes so we could determine how much was needed.  This jacket needed 3 extra inches down each side seam and the Velcro moved over for the belt.

The pants had the same story to add 3 inches with a wedge.

Before opening up the side seams, I noticed that a previous seamstress had added a football shaped patch and serged it with white thread on the inside.

You can see from the outside, it was inadequate and was starting to tear away and fray.

The opened side seams were placed on the new fabric, yes, it is not a proper match nor Kevlar, but it works OK. Then a chalk line was drawn and seam allowances added.

A pair were cut and serged. 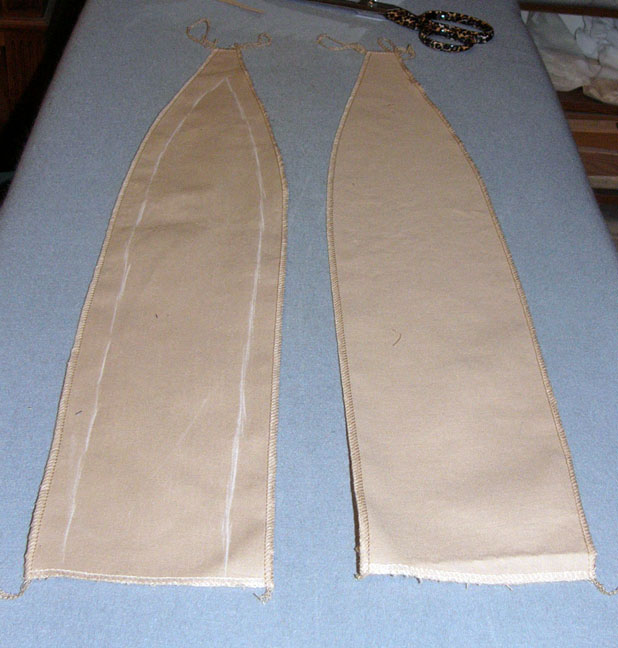 The side seam edges were cleaned up and serged and the patch added and Velcro re-positioned.

The patch edges were double stitched after being flipped to the jacket sections. 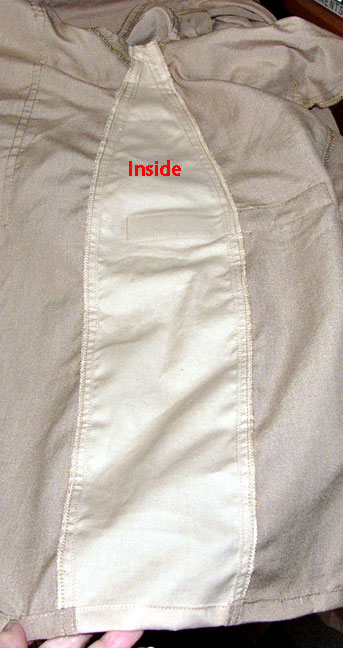 The pants got a wedge as well and the back belt loop was re-attached. The seam allowances were double stitched after being flipped all one direction. 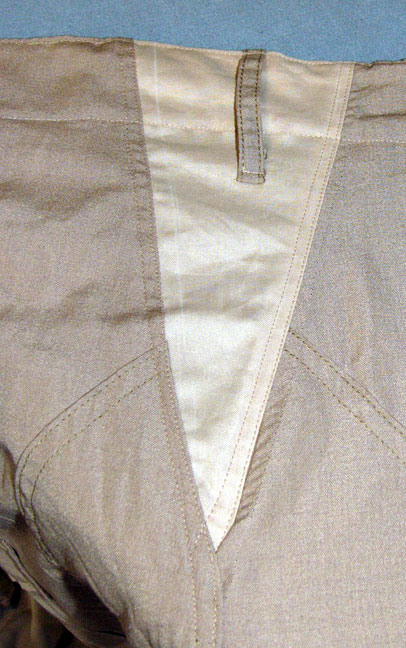 He can wear these comfortably and do his job now.

The other jacket needed wider wedges as it had been worn in Afghanistan and he had expanded a bit more since his service there. Once again, the side seams were opened, serged edges and patch attached and Velcro re-positioned.

It looks good hanging up on both sides. Even though this took time away from my bridal sewing, it is always a pleasure to work for hard-working, dedicated men and women who have served in the military and continue to serve now that they are back home.

Now, I know that I am just adding Kona cotton to his clothes and not Kevlar but this is what was brought to me and I’m working with it.

The pilot just picked up his garments after being in San Diego, California  fighting fires down there. The valuable work they do in the sky assists the workers on the ground with water drops and search and rescue.

For those of you who still need a bridal “fix”, you can check out Anne’s post with some daring bridal fashion!    https://prttynpnk.com/2016/10/12/wearable-wednesday-meets-the-brides/

Have a great week everyone…run through the falling leaves!

This entry was posted in challenges and tagged cedar waxwings, Flack suit repairs. Bookmark the permalink.