What do these two have in common? 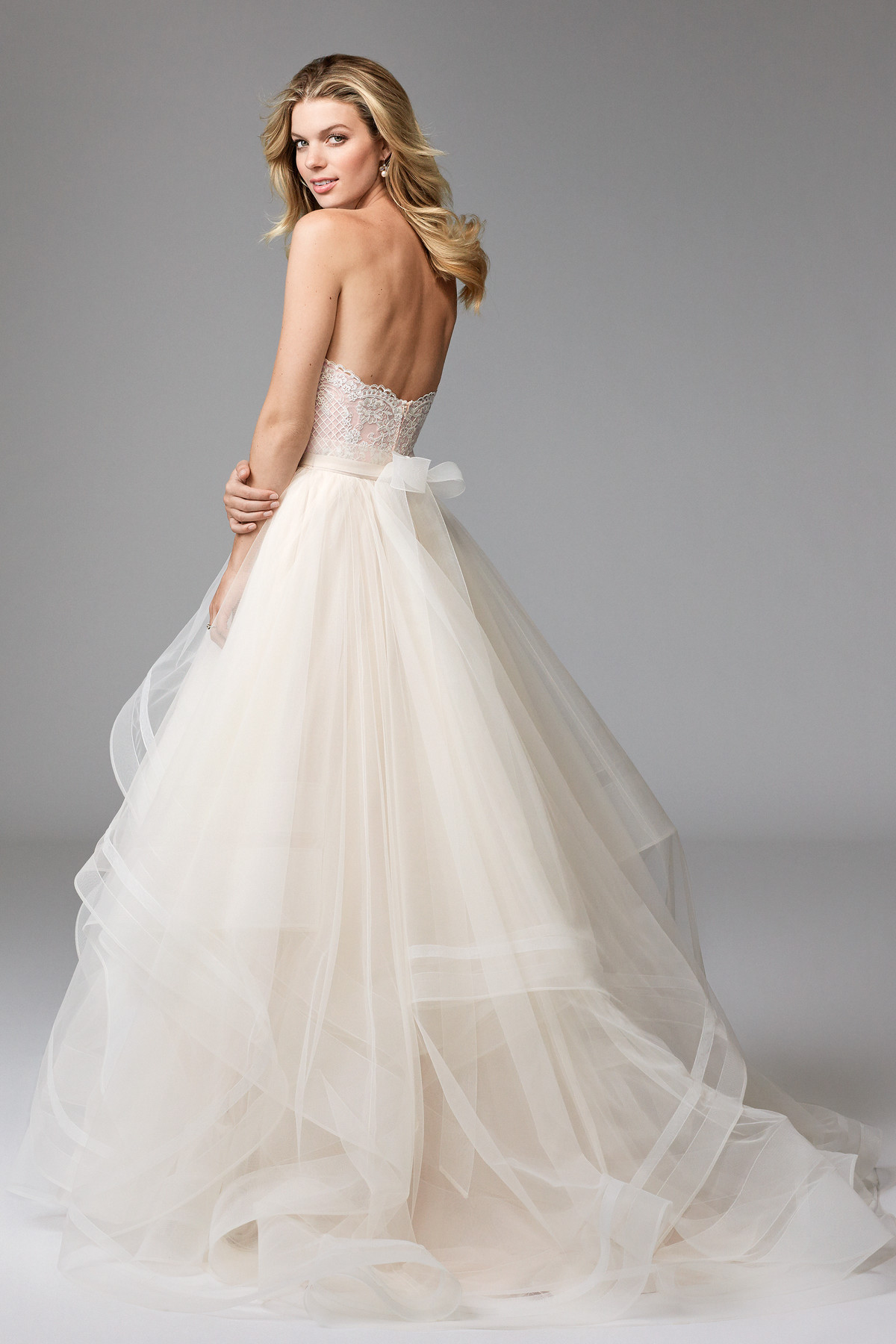 How about combining them? Yes, you can put that huge fluffy skirt over an existing dress for maximum drama walking down the aisle!

Let’s compare the model’s skirt to the real skirt before steaming/pressing with my generator iron. The skirt was a mass of Horsehair kinks. Under all that is one layer of satin with 8 layers of tulle and netting below. Then above the satin layer is 2 continuous layers of circles staring at the hem and rising up to the waist.

It took me one hour of solid steaming to get it looking good.

Second fitting with the skirt and without but with a 1-point bustle for the reception.

You may have noticed that it came with a 2 inch wide belt of Horsehair (what else?) covered on one side with more tulle so it had a shiny side and a dull side. The bride wanted me to fold the HH braid in half and cover the waistband and still have the belt open up to make a bow in the back….well. That was never going to happen and look nice and tidy. If you have ever handled the 2 inch wide version, you just know that this cannot be done.

I thought a lot about the solution and decided to cover the waistband with a chunk taken right out of the middle of the belt as the ends were properly sealed and finished.

Knowing that HH braid stretches and shirks when handled and cut, I cut the length 4 inches longer than the waistband to allow for shrinkage. But before cutting the middle section out, I satin stitched 2 rows where I was going to cut to prevent raveling…you know that stuff likes to unravel like crazy.

Once removed, the band is folded in half, tulle side out, pinned and stitched along the long edges and short ends to tame that puppy.

Using a strip of satin, the rough ends are covered and attached to the waistband away from the actual edges to prevent lots of bulk.

Then things got creative…if you are left with 2 ties, how do you attach them to the 1 inch waistband so they can be tied into a bow? You may have noticed that the original bow in the model and bride photo looks twisted and awkward…duh! First I thought… well maybe just attaching the ties on either side of the back opening would work but that HH just will not lay flat for a nice bow. Yes, I also covered the raw edges of the ties with satin.

If I just made the bow flat to start with, it would work and look better. The loops were folded and measured to 6 inches each and then folded down at a 45 degree angle and pinned in place. Then grabbing some more satin, I wrapped the center of the bow and hand tacked the whole thing down. Before I did this, I sent photos to the bride and she approved it.

Then came the problem of how to attach it and still be able to open the waistband. One side of the bow was sewn at the satin knot and over lap side and a large snap was added to the under lap side.

After all this messing and fussing, I left the sewing room and wandered outside to see Mr. Mole in his usual smoke mask harvesting. Every day we can harvest this same amount of tomatoes both large beefsteak and little orange ones as we have way too many plants producing. It is the first year we have planted carrots and pulling them up when they are smaller we hope they are not too woody. The pear tree is ready to be relieved of it’s fruit too.

We ended up with way more than 2 Moles can eat so I have been processing the tomatoes and freezing. So, one solution is to halve them,  season them, broil them for 10 minutes each side and dump the whole mess into a plastic container and toss into the freezer for future dishes like soup. Having the skins slightly toasted/burned adds to the sweetness. Other batches have had bell peppers added too.

Just plowing my way through the 13 brides for September now and hoping for cooler weather as the neighborhood kids return to school today.

This entry was posted in challenges and tagged cover a waitband with horsehair braid, horsehair braid bow, too many tomatoes, Willowby Sookie, Wtoo Effie. Bookmark the permalink.

26 Responses to Ruffles, Bows and Tomatoes