This Madison James dress found its way to my sewing room in March.

It then spent the entire summer with me until the Fall wedding as the bride lives out of state and could only come back for 2 fittings in 6 months. 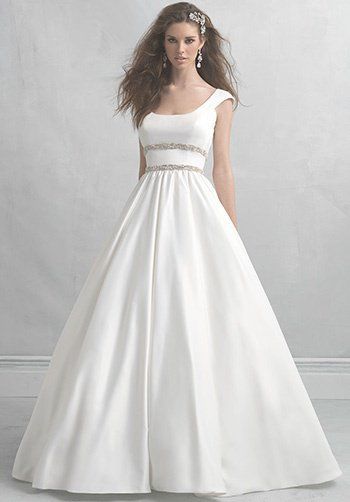 The train is huge and heavy being thick satin. The shoulders need taking up as well. The hem is stiff with 2 inch wide horsehair braid.

Starting with just 5 points pinned up tells me that we might have to go up to 7 just to get all this up off the ground. The weight of all this satin is unbelievable! Covered buttons and rhinestones run the full length of the center back seam to the ground.

You can see how much the bride wants removed from the shaped cap sleeves. Can you also see how doing this causes wrinkles/drag lines in the side bust panel? Push up bust pads are pinned in place but this bride will have to compromise on what works and what doesn’t. This happens when you take up the shoulders so much as to distort the actual curve of the bust seam. Where does that fabric have to go to lay flat again?

The top waist beaded belt needs to be shortened by 2 inches, one inch on each side.

First, all the rhinestones and pearls have to be removed one at a time, no bead cracking this time! The naked edge is folded under and 3 hooks and eyes are attached and the resulting belt is together without looking like anything has been done. Did I save the beads for her??? YOU BET! 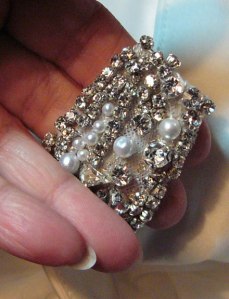 I have thread marked where the fabric will be removed from the strap and cap sleeve.

Also this bride wants to have triangular cut-outs made in each side seam so skin colored mesh can be inserted to make it look like she is not wearing any underwear. Guess what…SHE ISN’T wearing any!

The openings will be 5 inches long and 2.5 inches wide. The mother was not happy knowing this was the bride’s request but I lucked out as the bride wanted the entire length of the side seams opened to the waist to reveal more and more. The second strip of rhinestones is actually glued tight to the satin and I was not about to get into that mess so we are stopping at the top level.

There are 2 layers of thick satin and one layer of lining and a strip of boning to deal with. Not what a seamstress wants to see when she opens the seam…layers! 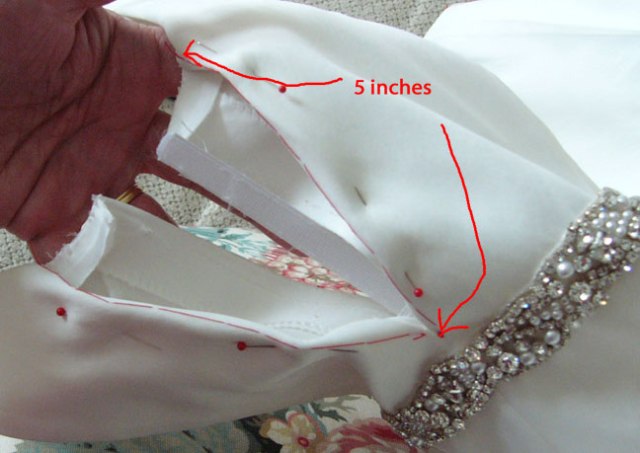 Before the second fitting I made two 2-layer skin colored chiffon inserts to fill the open side seams and have them attached by hand.

Tucked into that triangular space…hand basted…hmmmm. That way the bride can still change her mind if they don’t  look like she envisioned. 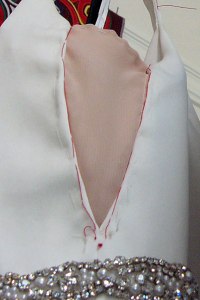 Second fitting with 2 inches taken out of each strap thus raising the entire dress up, we still have the drag lines in the bust but the bride is so happy that the waist is sitting on her waist. Once I get inside of the bodice, I will take in the princess seam to see if that helps. You can see how the whole design of the bodice changes once you hike the straps up.

The bust would have fit better lower but we have changed the whole arc of the bust points and adding those side pieces just adds one more issue to create problems. While the straps are now shorter and narrower, the design still needs to rest at the outer edge of her shoulders and not like regular straps. Raising the shoulder straps also makes the underarm fabric crawl right up into her armpit so the armhole will have to be lowered an inch or more to compensate.

The upper belt fits tight and the lower belt sits well on her hips without revealing too much in the cut-out. Originally she wanted the back “V” dropped even lower…so glad I talked her out if it! The 5 point bustle could use a few more points but she likes the soft loops of fabric. To me it looks messy and uneven.

Let’s tackle the bust drag lines…taking in the princess seams 1/2 inch on one edge only. 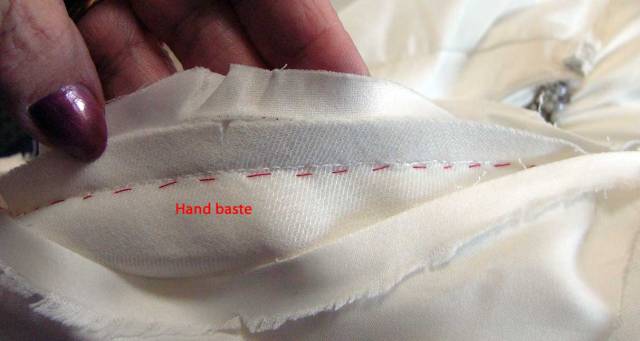 With the satin layer and under layer basted, the only thing I could think of for the lining was to hand tack a tuck and not bother messing with the boning. I could reduce the volume by 1/2 inch with a 1/4 inch tuck…fingers crossed it is enough!

Here you can see how I shifted the princess seam over 1/2 inch on one side. I wanted to maintain the spacing between the bust points and not take in both edges, only the offending one.

Can you see the furry edges? Man this stuff can ravel just by looking at it!!!

The shoulder seams of the straps are thread marked for narrowing…can you see the dirt marks? This dress had spent many seasons being tried on in the shop.

Both triangles under the armhole are marked ready to be basted and folded under: 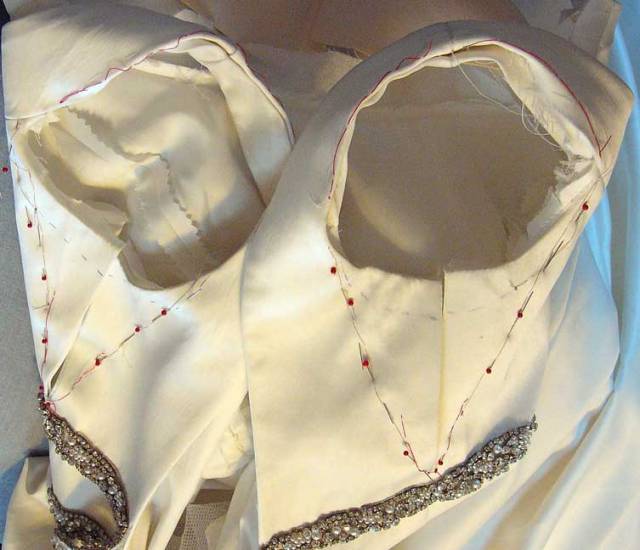 The shoulder seams are machine stitched, narrowed and under stitched along the neck edge.

The final nude netting (doubled) with French seams at the top edge for stability.

This photo shows the netting in place before the lining is attached by hand. So many variables with so many layers all trying to get into the act. Have to tame all the layers but at least the bust drag lines are gone…hooray!

On the outside I ran a tiny row of machine stitching along the edge to keep everything nice and secure.

Finally the bust cups are attached and ready for the final try-on:

The final bustle…messy and drapey….just what the bride wanted and with 11 bridesmaids, they should have no trouble finding the loops and buttons.

Before I race back to the other gowns, these two beauties were produced and for some strange reason, they each have a pigtail curved section that you could run a string through and hang them up.

Three days until Turkey day and then the following day we help set up for the 100 ASG drawstring pillowcases filled with all of life’s necessities for homeless teens and seniors. Doing charity work over the holidays fills one with a real sense of gratitude!!!

44 Responses to Lots to Reveal