Most brides this year have wanted to show off as much “boobage” as possible but one sensible bride picked a dress, had a baby, and needed to fit back into her dress for the wedding. She arrived with this small dilemma:

We needed 2 inches from the side seams to get the zipper closed and the back deep V was too loose. The solution was to open the side seams and allow the dress back to drop down over her hips. The wrap front was too low so something had to be put in there. The front hem from side seam to side seam had to have the lace edging raised up 2 inches and re-attached so I could use what I cut off there to fill in the cleavage area.

Instead of just slapping a flat straight piece of lace there and looking like grandma had worked on the dress I decided to make it in a “V” shape that looked like the dress was made that way. So let’s get started: 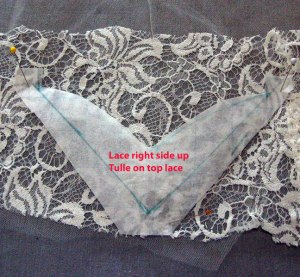 Stack lace right side up, tulle on top and then the pattern…don’t trim anything! 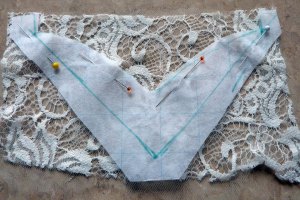 Pin pattern for the stitching guide.

Zigzag lower edge and trim off 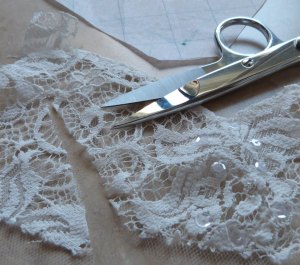 , Pin and hand stitch into place 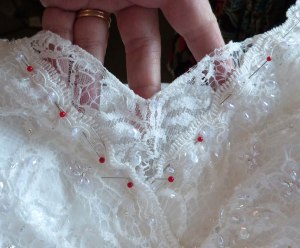 with her 3 point bustle and shortened lace hem.

Also this week, another bride came in for her final fitting and finally remembered to bring her shoes for the bustle making. She has been very quiet, no show of emotion, blank stares, almost zombie-like demeanor while her mother cannot stop talking about everything involved with the planning in 10 days. The last fitting involved the bride standing on the platform while I trimmed off some extra netting under the bustle and at one point her lips turned blue, she got all clammy and white and had to sit down. I asked her when was the last time she ate as it was 11 am and her answer was “yesterday”.  After a little rest she got back up and then collapsed into her mother’s arms this time with her eyes rolling back into her head and her whole body shaking. It was then that her mother told me, “she has saved herself for the wedding night and she is terrified.”

This added to the fact that I already knew she was only 17, bought her wedding dress the same day as her last prom dress in June and never wanted to have children and her fiance stacks luggage on a carousel at the local airport just made me wonder why anyone would rush their daughter into such a marriage. It was as though the bride was part of an arranged marriage, almost a child bride and I thought about her not even being able to feed herself breakfast while her mother was at work and having no job, no career, no plans for the future. I can understand being pregnant and wanting to marry, or marrying before your sweetheart goes off to war or even following a religious tradition of marrying early but this makes no sense. Life is scary enough!

Last week, Mr. Mole and I took a few days off to escape the sewing room and planned to relax on the coast but managed to endure the worst storm in 25 years with 50 mile an hour winds, flying debris and flooded roads and driving rain…but it forced us to stay in the rented condo and read and enjoy just being together with no clients or aging parents to take care of….heaven!

Here is what I found in my garden when I returned:

Have a super sewing week everyone!

This entry was posted in challenges and tagged cleavage cover, lace insert. Bookmark the permalink.

27 Responses to Cover My Cleavage